Home Fingers in many Pis Scroll pHAT: A block of white LEDs

After the PiGlow, the next Pimoroni add-on I tried for the Pi Zero was the Scroll pHAT. A little board with a block of 5 x 11 white LEDs. 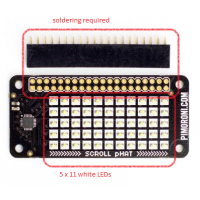 This matrix of LEDs is intended for scrolling messages or doing very simple graphics/indicator jobs. It's a simple, cheap board that does its job well. It isn't as pretty as the PiGlow, Blinkt, Unicorn pHAT, etc - it's just white LEDs in a rectangle. If you wanted pretty, you'd get one of those instead; or some other pretty pile of multi-coloured LEDs/LCDs/TFTs.

Handily, it's the same size as a Pi Zero, so those corner holes line up (for stand-offs) and make for a neat package to fit in whatever enclosure/space you have in mind.

Get your soldering iron out

Unlike the PiGlow, the Scroll pHAT was created specifically for the Pi Zero. The Zero doesn't come with a pre-soldered header for its GPIO pins, they're left as vias on the board to keep costs (and physical height) down. So the Scroll pHAT was left with its GPIO header similarly un-soldered.

The primary reason for this is probably cost, but it also lets you choose whether to go the standard male/female headers route, or arrange the 2 boards very close together with a directly soldered low-height male header strip, or use some ribbon cable for a more clever arrangement.

Basically, you'll need to solder something to your Pi Zero (if you haven't already) and something to the Scroll pHAT, before they'll start talking.

I'm the worst person to give soldering advice, other than to say watch some YouTube clips of people doing a much better job than I ever could.

Having said that, I would suggest taking a macro photo on your phone of the solder joints, before you give it any electric. That way you can fix any crap joints or bridges before you let the magic smoke out. Here's the job I did on the Pi Zero side of things:

What can it do?

Count down from X to 0 then say "kaboom" No really, that's the first use I had for it. Pi Zero, Scroll pHAT, some small red flashing bike/runner lights, some small black boxes, all arranged in a small flight case with a handle on top. Did quite a good impression of a movie bomb for a James Bond themed fancy dress party. Maybe a separate blog post about that.

Display its IP address Pis are often run headless, with Wifi, which (if you're using DHCP) can make it awkward to know what IP address the device has. Ok, you could log into the DHCP server and have a look, but having the thing just tell you repeatedly is quite neat. Especially if the DHCP lease time is quite short.

Scrolling CPU load Although 5 "pixels" high doesn't give you much detail, it can be used as a real-time scrolling graph if you don't need much detail. I slightly tweaked one of the example scripts from Pimoroni so the CPU load was displayed from startup - to get an idea of how much load various jobs were putting on my little headless server.

It turns out that running a full security scan of my network maxes out the CPU immediately and means every LED of the board stays lit for quite a few hours. So maybe don't do that. Yes, I know, "no shit Sherlock!"

Error/Warning Indicator Rather than a scrolling chart, it may be more useful to have some kind of mini dashboard type thing. Each LED is individually addressable so you could use different rows/columns/corners to indicate stuff you care about. Maybe flag any 500 responses if you're running a little web server. Maybe disk free levels if you're doing camera work.

You could even get artistic and slap suitably coloured pieces of gel/plastic over the matrix so the warning LEDs were red, happy LEDs were green. Remember LEDs do get a bit hot though!

Unlike the PiGlow, the LEDs used are not eye-burning bright. They're still bright enough that you won't want to stare at them on full brightness for long, but at least you won't regret trying out the example scripts while looking directly at it.

Also, the nice chaps at Pimoroni provide a frosted plastic layer, with mounting holes, that makes the display as a whole easier to read when running at high brightness.