Home Fingers in many Pis Piglow: a swirl of LEDs

Piglow: a swirl of LEDs 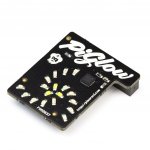 One of the first add-ons I bought when I started playing with Raspberry Pi Zeroes was the Pimoroni PiGlow. This is a tiny pHat (Pimoroni term for a tiny Zero add-on board) which contains 3 spiral lines of 6 different coloured LEDs.

The main selling point for the PiGlow (for me at least) was that it's a cheap way of getting a whole bunch of colourful LEDs in a format that's easy to work with - both the hardware and the software.

Pimoroni, Pi Supply, Pi Hut, Adafruit etc now do some even cheaper Blinkenlights Pi add-ons, like the Blinkt, PiStop, Fish Dish, NeoPixel Jewel, ... But PiGlow was the easiest and cheapest available when I got my first Raspberry Pi. Yes, the PiGlow header fits all the variants of Pis.

The lights, they burn!

Turning on all the LEDs at full brightness is an eye-searing rainbow experience. Seriously, don't look at the LEDs if you run them at full brightness, it hurts. People have used these things as lighting. Ok, not full room lighting, but a PiGlow cranked up to 11 (ok, 255) would work well as a colour-changing mood/ambient lamp.

This is one of the first boards Pimoroni produced and they've honed the library pretty well by now. Assuming you're using a Raspbian OS and are ok with running scripts from strange nerds in Sheffield, install the library is a 2-liner. Or a 1-liner if you like glueing things together with semi-colons.

Once the library is installed there are a bunch of example Python scripts to get you started. There are also libraries and examples around for C, C++, Java. Probably other languages too, since the underlying interface to the PiGlow seems to be pretty simple to drive.

Pimoroni have referred to the PiGlow as a kind of "my first Pi project" from their side, so they clearly have tried to make it as simple as possible to drive. And that's appreciated - thanks guys!